Extensive photos and short videos are available regarding the following. We’re looking into the best way to post these on the web.

1. Visit to Yepocopa and refugee camp created in the aftermath from Hurricane Stan

2. Visit to Telecentro Asodigua and weavers at Santa Catalina

3. First formal meeting of the Indigenous ICT Commission of the Americas

Oct. 2005, Hurricane Stan caused major flooding down the side of many steep volcanos and mountainsides completely wiping out many homes and communities. Thousands died in many communities and government support in many cases never arrived.. One such community still lives in temporary shacks provided by USAID on the outskirts of the Indian village of Yepocopa.  Disease and lack of housing, food, and jobs were reported to us by the leader of the destroyed village.

The Metis Nation of Ontario created a fundraiser and provided $5000 for mattresses so they didn’t have to sleep on the ground. (see photos and articles at www.metisnation.org ) Tony and Danielle Belcourt were eager to return to this village to assess what progress had taken place over the last year and to share print photos from their last visit over one year ago. We drove to the far side of a major volcano on rough dirt roads which had received major repairs since the hurricane.

Felix Xia is the volunteer local radio station operator and when he heard the flood warnings in the dark at 1am he rushed to the station telling everyone to get down to the people along the rising river banks to get them to higher ground. He saved dozens of lives that night and Tony, Danielle and myself visited him, his wife, and his eight children. Felix asked us for help getting a new electronic unit for his local radio station. We talked about his hopes for the future.

I met Manuel Garcia from the Telecenter Asodigua at the 1st Indigenous ICT Conference in Mexico City, November 2005. We met again at the 2006 Pacific Community Networking Summit in Vancouver 2006. He doesn’t speak English and I don’t speak Spanish, but we consider ourselves good friends. We joke about the prophesy that one day the Eagle and the Condor will join together to lead a new day of opportunity for the indigenous peoples of North, Central, and South America. He is actually the Quetzel, a beautiful plummed bird (near extinct) in Central America. A beginning web site was created by a friend in the Blackfeet Nation in Montana showing photos of weavers and weavings: http://telecenter2007.tripod.com

Tony and a group arrived at the Telecentro Asodigua to participate in a 45 minute accounting of their progress over the last year. They have received two awards for excellence with cash prizes and the entire discussion with ongoing translations was videoed. Manuel hopes to get wireless from the urban telecenter located in Solola direct to his small village on the outskirts of Solola.

We then proceeded to the shores of Lake Atitlan, surrounded by five dramatic volcanos, for a fine luncheon hosted generously by Manuel. Of particular note was Villma’s update on her work training indigenous women in computer skills. Their passion and sophistication was awe-inspiring and we look forward to working together in the future.

After lunch we drove across the river bed where a huge flood had destroyed many homes and all the bridges. Bridge construction was underway. We drove to Santa Catalina, an Indian village on the steep slopes above the lake. We walked up steep stairways until we reached a small level area with two dozen female weavers and their young children.

Manual related to them our plans for creating an Ecommerce project to help sell their weavings and they heard greetings and comments from Clem Chartier, the president of the Metis nation, nationally, and Tony Belcourt, president of the Metis Nation of Ontario. Print photos were exchanged from Tony’s last visit and many (absolutely amazing) weavings were purchased by our group.

As mandated by years of International indigenous conferences and most recently by the final report of the ITU Mexico City 1st Indigenous ICT conference, the commission was formally tasked to create an independent autonomous commission to advise the ITU and others on many issues, including a pending proposal for an Indigenous Portal for the Americas.  Roughly sixteen persons met in Antigua, Guatemala for three days to begin the process for formalizing this commission. The website for the commission is at http://www.iccta-citca.org/

Joe Garcia, president of the National Congress of America Indians, joined us to represent the 275 Native American nations who are members of the NCAI. A dozen others representing 10 nations from the Arctic to Antarctica attended. A representative from the ITU presented their plans for a portal “By indigenous, for indigenous.”

This meeting was made possible through the sole tenacity of Tony Belcourt who persisted to win funding primarily from CIDA to conduct this meeting.

ITU did not provide funding and we have much work to do before we are prepared to report further on the next steps for the commission.

Twice we drove ½ hour up the slopes of a major volcano to the 100% indigenous community of Santa Maria. The market was a colorful display of vegetables and weavings. The air was rich with children’s laughter from the nearby schoolyard.

Horses laden with firewood and produce were a part of the local traffic along with men carrying dramatic loads on their backs, as well. Churches dating back to the 17th century seemed to be everywhere.

Of the 12 million people in Guatemala, 7 million are indigenous. Watching the women of Santa Catalina on the shores of Lake Atitlan weaving meticulous patterns with their fingers flying reminded me of computer programming with its complexity and precision. I was told each color has meaning, the blue greens are the local colors associated with majestic Lake Atitlan surrounded by five classic volcanos. (Guatemala has 18 volcanoes with three active.)  Each indigenous village has their own identity expressed in weaving patterns and colors which are worn by the locals - so at a glance one can tell who is from where. When the women weave they are actively expressing and communicating their identity, their culture, and with each movement they add something profoundly symbolic to their amazingly beautiful weavings. Each weaving represents thousands of precision movements. The weavings are carried in a bundle as their livelihood until each item is sold. Typically for far less than they are truly worth. I wouldn't hazzard a guess at their hourly wage but I'll guess less than one dollar per hour, if that. With each weaving there is a connection to their realities - whether recognized or not. It still is there.

On my way to a special meeting with the weavers associated with the Asodigua Telecenter where leaders of the Metis Nation presented their intents to partner with the weavers in an international Ecommerce project, I was approached by another weaver eager to sell her weavings. Not having a translator nearby I declined and she suddenly changed her demeanor from friendly to fed-up and launched into what was later related to me as a diatribe that I don't know what work is, etc. And compared to the work the weavers do on a daily basis, I'd have to agree she was right. We're from different worlds. I guess the point here is that in the modern day we thankfully at last do have the means to reduce the inequities that exist on a global basis and now, to me, the weavings are symbolic of this hope.

The photo with the weaving - speaks for itself as to the importance of our future due diligence to do what needs to be done. 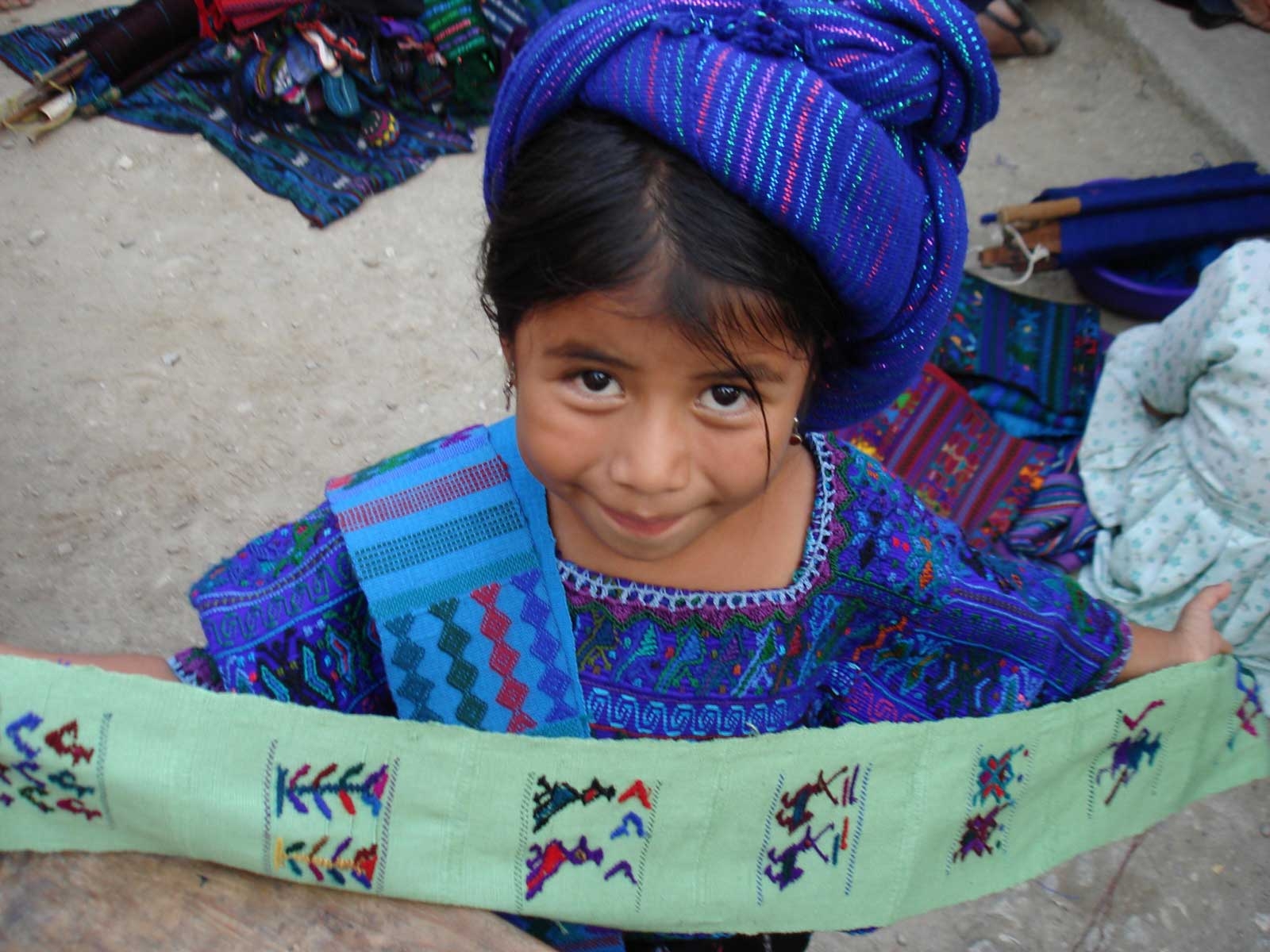